We awoke from a loud night’s sleep at our riverside campsite. The dogs barked all night. Galey, our guide tells us that the dogs are keeping the demons at bay. We beg to differ! No matter where we are, the dogs seem to follow, sleeping through the day and fighting demons at night.

Both of us were out of the tent by 6am, bleary eyed and exhausted, but the stunning mountain views made up for it. Prayer flags flapped in the breeze by the riverside and the water was calm. We decided to go for a walk around a stupa beside the campsite. A stupa is a focus of daily worship here in Bhutan.  They are situated in locations that are considered inauspicious such as river junctions, crossroads, mountain passes and bridges to ward off evil. The square rectangular base symbolizes Earth, the hemispherical dome symbolizes water, and the pyramidal spire symbolizes fire. The crescent moon and sun on the top represents air. We have been taught that you must walk around in a clockwise direction, which is called circumambulation. It is a sign of respect to keep the right side of your body towards the object of reverence.

We quietly made our way through the opening in the old gate and proceeded to walk around the stupa while taking in the morning air. We fell into a conversation that has lingered for us both. As you can imagine the Buddhist culture has a strong hold on everyone in the Kingdom of Bhutan. You cannot help but feel the spirituality everywhere you go. We started to talk about the way we each honour our own belief system and how it differs from that of the locals here. We were trying to think of another place in the world that is so unified in their beliefs, morals, and overall approach to life. We could not come up with anywhere. Maybe it’s because Bhutan only has 700,000 people in the entire nation. Maybe it’s because they are all raised with an acute sense of their own culture and national consciousness. Maybe it’s because of their isolation in the world, or that modern niceties are relatively new. Whatever it may be, their unified perspective is highly palpable.

There are countless ways that the Bhutanese demonstrate their commitment to their faith. Whether it’s ensuring their daily visit to a temple, wandering for hours around a stupa, counting their prayer beads, spinning prayer wheels as they go, prostrating and quietly chanting, lighting butter lamps, or making monetary and other offerings to the monks; these small, significant rituals highlight how the Bhutanese weave their faith throughout each day.We recognized that our own belief systems are individual. Back home, it’s hard to feel as connected to others. 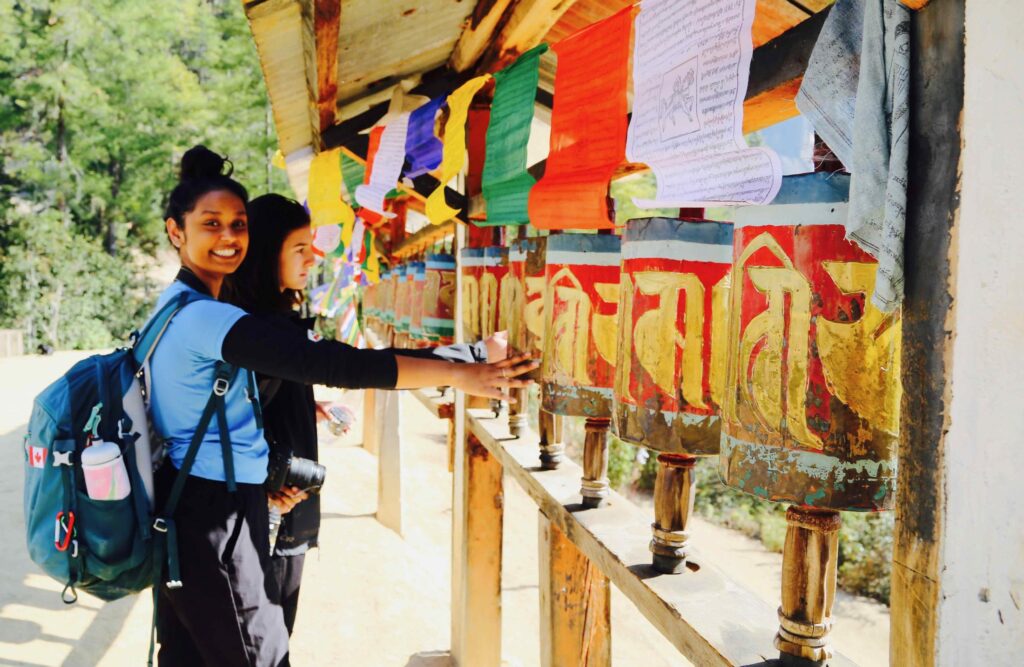 The overall feeling of supporting one another is not only a part of the Buddhist faith, but it’s a part of their Bhutanese culture. Here, they take care of one another no matter what. One of the student’s at Ugyen Academy told us that if they were to go to any village in Bhutan, they could knock on any door and be welcomed in for the night. A meal, or whatever was needed would be offered with open arms.  At home, many of us don’t even know our own neighbours.

We have been struck by their commitment to be their best version of themselves. Not only for their present life, but to help them reincarnate into a human in their next life. Their goal is to reach nirvana, where they believe they will be free from suffering during the process of rebirth. Maybe if more of us believed that our actions in this life impacted our afterlives we would be better people.

On our learning exchange with Ugyen Academy, we met a student in the tenth grade who told us that he was sick in his early years of life. When people become sick here in Bhutan, they rarely visit a doctor. Instead, they visit an astrologer to see if they can understand the root of their sickness. They believe it almost always stems back to their past life. This student told us that the sickness he experienced in his early years was due to the fact that he hurt a baby in his past life; his sickness was a form of punishment. When asked how he felt about that, he said, “It’s mine to own.” What a humbling response.

From a distance we could hear the rest of the group awakening, the crackle of the fire and morning tea being served. As we made our way back to the rest of the group we couldn’t help but reflect on our inner beliefs and how over the course of less than a week, Bhutan had left it’s imprint on us both. It will be a challenge to hold onto these feelings of calm and self-reflection as we return home to a different energy, but we will always have that morning walk circling the stupa. 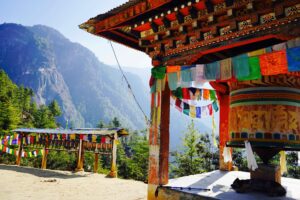 I Now See the Meaning of Happiness in a Different Way 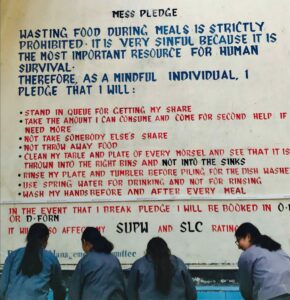 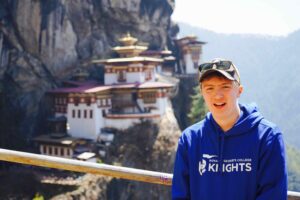 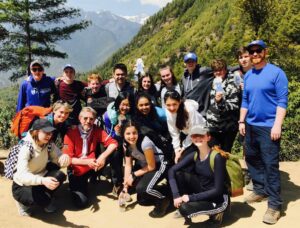